Final Fantasy XV sets the tone with a not-so-serious approach.

Noctis, Gladiolus, Ignis, and Prompto come back from a bachelor’s vacation when their Regalia convertible breaks down in the middle of the desert. The player is prompted to push the car forward. After a couple of minutes, the score drowns out the complaints of our four protagonists and the camera pans to the sky. Cue the Final Fantasy title!

(Please note, this article contains some spoilers from Chapters 1 – 4)

The plot is easier to grasp compared to the likes of Final Fantasy XIII (which by the way, I still don’t completely understand). Prince Noctis is from the region Lucis, and he is about to marry Lady Lunafreya of the region Tenebrae. Upon coming back, Noctis and friends find out Niflheim, an opposing empire, attacked the capital of Lucis. Niflheim steals an important crystal and kills King Regis, Noctis’ father. Together, our four protagonists must claim back the kingdom and defeat the empire.

Straightforward so far.  A few things catching my attention:

The biggest draw to this plot is you have the main party right from the beginning, and all four of them are best friends. This isn’t some rag tag group you pick up along the journey. The comradery, the brotherhood, the interactions. Everything feels more organic.

We move away from Final Fantasy XIII’s paradigm shift and backtrack to a more traditional active battle system. You only have control over Noctis, but the player can implement different techniques from the other party members. The characters gain abilities, techniques, and other perks by using ability points on the Ascension Tree. This feels very similar to Final Fantasy X’s Sphere Grid, which I’m a huge fan of.

What’s throwing me off is the Elemancy system, and I’m not completely sold on it. There are extraction points on your map for blizzard, fire, and lightning magic. After extracting magic, you create different spells in battle. I can only find blizzard, fire, and lightning magic so far, and I will be extremely disappointed if those are the only ones. I love the variety of magic spells you can have in any given Final Fantasy. Where is ultima and demi? Also an important note. You can attach magic spells to any character, but the best person to have them is Ignis.

The game employs vast areas to explore and not just on the surface level. Some canyons lead to hidden dungeons and havens. You experience different environments, starting in the desert and moving to the swampy green valley by Chapter 3. All the towns and rest stops have their own flair, too. You can be at a small rest stop, a fancy beach resort, or even a chocobo ranch.

See how large this world is by the fact your main mode of transportation is car. This is definitely the most modern Final Fantasy. 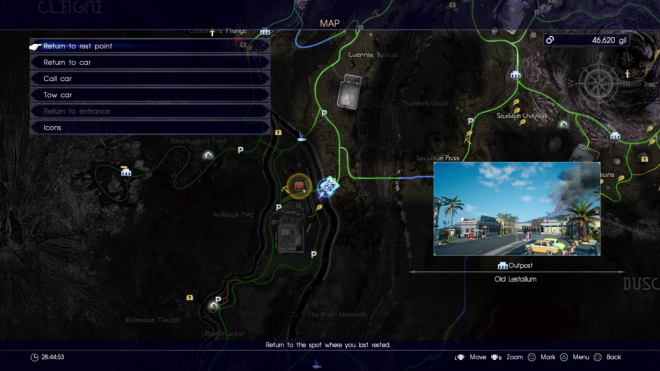 Side Missions, Experience, Skills, and other Extras:

With the world right in front of you, you can gain experience outside of battle. The game has many side missions, which may involve chocobo racing, monster hunting, or item retrieval. After completing a mission, you gain a specific amount of experience for your characters, sometimes more experience compared to regular battles. Side missions are a quick way to level up. It’s easy to get bored with side missions, so space it out.

On top of that, each player has a set of skills that can benefit the party in some manner. Noctis can get fish filets, Gladiolus can find more items in the wilderness, and Prompto can annoy you with photoshoots (but with good intentions. I have a soft spot for him). The most useful skill is Ignis’ cooking, because certain recipes provide battle boosts for a temporary amount of time.

My favorite feature so far is the music and how you can buy CDs of other Final Fantasy soundtracks for your long drives. My life changed significantly after finding the Final Fantasy X CD.

I definitely appreciate this game so far. Don’t know if you’re interested? Well, you’ll be missing out on the greatest selfies of all time…