Live action film adaptations of video games don’t always translate to movie form. In a weird way, this one does. Just look at 2005’s movie DOOM starring Karl Urban, Dwayne Johnson and Rosamund Pike. You’d think this movie would at least be enjoyable due to the stacked cast but sadly, it fails to find anything enjoyable. Action and horror games seem to make the best movies with Resident Evil, Prince of Persia, Silent Hill and Assassin’s Creed showing some promise although getting mediocre reviews. Animation creates higher reviews with movies like Wreck-It-Ralph (though not directly based on any one game but borrowing elements from some) having a better metacritic score than its live action counterparts. Rampage and Sonic getting their own movies shows that hopefully animated versions of video game movies.

Live action video game based films from Japan are usually of better quality than their American counterparts. They aren’t afraid to take a well known or obscure series (at least in the West) and make them into something actually watchable. The Ace Attorney film is one of those. It looks and feels like a cosplay movie, complete with ridiculous hairstyles. Speaking of ridiculous, this brings us finally to the topic of the Yakuza based movie, Like a Dragon (龍が如く 劇場版 Ryū ga Gotoku Gekijōban in Japan.) Released in 2007, the film loosely follows the first game in the series. The film is directed by acclaimed filmmaker Takashi Miike who has directed a variety of commercially successful films such as Ichi the Killer, 13 Assassins, and the aforementioned Ace Attorney. The film actually didn’t have a very large budget but Miike was fond of the project and came in under budget while still creating a film that is in the vein of the Yakuza universe. If you played Kiwami or the original 2005 title, it’ll feel all too familiar.

The official movie description:
“In the sweltering heat of Tokyo summer, the night begins with a hapless bank robbery and the disappearance of ten million yen belonging to the Tojo gang. Meanwhile, yakuza Majima Goro (Kishitani Goro), decked in a gold suit and with more than a few screws loose, is out to fight rival gangster Kiryu Kazuma (Kitamura Kazuki). The somber and seemingly indestructible Kiryu, however, has just left his gang and has in tow a little girl (Natsuo), whose mother he is trying to track down. In another part of Shinjuku, Satori (Shioya Shun) and his girlfriend (Saeko) decide to start holding up stores for fun, and mysterious Korean hitman Park (Gong Yoo) haunts the rooftops looking to off the culprit behind the bank robbery. As the night passes, Majima and Kiryu cross paths repeatedly, in a series of increasingly bloody and bombastic stand-offs that bring them straight to the top of the Millennium Tower.”

The film “loosely” follows the plot of the original game/Kiwami with everything from the baddie being technically two people, a final showdown with Nishkiyama and interconnected storylines instead of “substories.”

See any big names above? They’re not the best actors in all of Japan but they did a pretty decent job at portraying their video game counterparts. The only name I recognize is Kazuki Kitamura, who’s only work I’ve seen was Godzilla: Final Wars in 2003.

I have to say, the costume designer and set designer for this film did a really good job of making the film feel like we are looking at the video game. From the POPPO convenience store to Majima’s animal print jacket, these actors look just like their characters. Although I don’t agree with some of the actor choices, I have to give them props for doing their best. 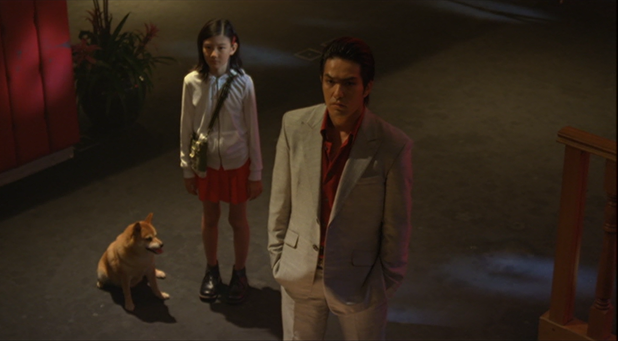 Their storyline is very close to the game’s story. Kiryu is trying to find Haruka’s mother, Mizuki Sawamura. That’s the gist of it. Kiryu meets Majima occasionally in the movie and they have some pretty sick fight scenes. Their costumes are on point and pretty much act like their video game versions.

Following the “Majima Everywhere” mechanic from Yakuza Kiwami, Majima is hot on the trails of Kiryu trying to find him and challenge him. Throughout the movie, he wields a bat much like his slugger style in the games. Ruthless, cunning and armed with a Kansai-accent, Majima in the movie doesn’t let anything get in his way.

I felt as though their story was at the weaker end of the spectrum. They’re basically a couple who meets Kiryu in the beginning during a brawl in the POPPO convenience store. Inspired(?) by Kiryu’s actions, they decide to rob everyone and everything. They weren’t in the original game at all so their inclusion in the film leads me to believe they are added to make the audience relate somehow.

Honestly I didn’t really care about this thread in the movie. A hitman from Korea trying to find out what happened to the missing ten billion yen? It was Kiryu’s job in the game! But or some reason they gave it to a Korean actor. The only hitman I remember was from Yakuza 0, the Chinese dude.

Their storyline is easily forgettable as well, so I won’t say much about it although it does feature an important character to the game series, Inspector Date.

I honestly still recommend checking out this film if you’re a fan of the series and especially if you’ve played Yakuza (2005) or Yakuza Kiwami.

The town of Kamurocho is a character unto itself. Shot on location in Tokyo’s red light district Kabukicho, the story takes place over one night. Yakuza’s ficitional town of Kamurocho is based on real life Kabukicho so it only makes sense to shoot it there. It’s clear that the budget for this film wasn’t large (I’m guessing around $3mil to $5mil) so it only made sense to shoot in studio for certain scenes.

Overall if you’ve finished Kiwami, like me, and you are waiting for Yakuza 6: The Song of Life to come out, check out this movie. Fans of the game will love it and general movie-goers will love the campy and over-the-top feel. You can watch the movie for free here. Shhhh you didn’t hear it from me!