Is the turn-based grid system for this sequel game fitting in the South Park universe?

Playing through Ubisoft’s The Fractured But Whole, the game is similar in many ways to its predecessor The Stick of Truth. The game isn’t short of the typical humor and antics Trey Parker and Matt Stone produce. The player continues to explore in the South Park open-world. The characters team up once again in some degree, but instead of a Lord of the Rings/Game of Thrones inspired world they encounter a “Marvel” Esque universe, where Coon and Friends, Mysterion, and Professor Chaos rule the town. But one of the most significant updates and changes in this latest game revolves around the battle system.

Instead of a turn-based combat where your attack directly hits an enemy of your choosing, the player battles in a turn-based grid where you can only move as far as an attack permits per turn and your attack hits a specific area that can attack multiple enemies at once (think the Fire Emblem series). 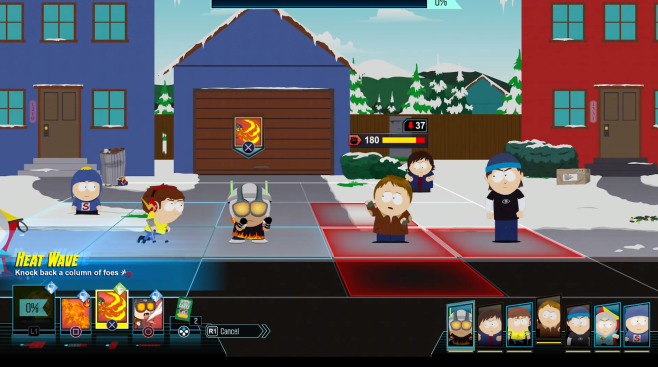 It makes the turn-based system a lot more interesting and a lot more strategic, presenting more elements and challenges to consider:

The system is a creative upgrade from The Stick of Truth and allows the player to strategize more meaningfully. There was nothing wrong with the original game, but it was clear-cut. I support this transformation to elevate the game. It also feels more fitting to the story with the characters as superheroes with the utilization of powers

A critique I have is in context to the game and time, there are times this grid system does not fit. Everything feels fast-paced and things move fast, but sometimes these battles can take a while to finish. This type of system slows down the game, it’s almost as if we lose momentum built from the Coon and Friends and cutscenes leading up to it. It also makes experiencing farming a bit of a chore, which leads to crafting and artifacts.

Crafting and artifacts wrap up the battle system holistically, balancing out the turn-based grid. It’s whole point that the game does not want you to just farm experience with alley and rooftop attacks. You need to boost your character through crafting artifacts (special items that boost a skill or attack) and your costume (armor). You need to complete missions and search every trash can and luggage for items to craft. Your rank will increase and allow for more possibilities, your character will strengthen, and the long battles will dwindle. Of course, this also becomes a long process for the player, but in my opinion it adds more heart to the game than just a traditional fight system.

With the lightheartedness of this game’s storyline, I understand if people wanted something more straightforward versus tactical planning. This battle system is a learning curve but the player will start to think in terms of chess versus checkers, enhancing a South Park episode to an immersive battle experience.