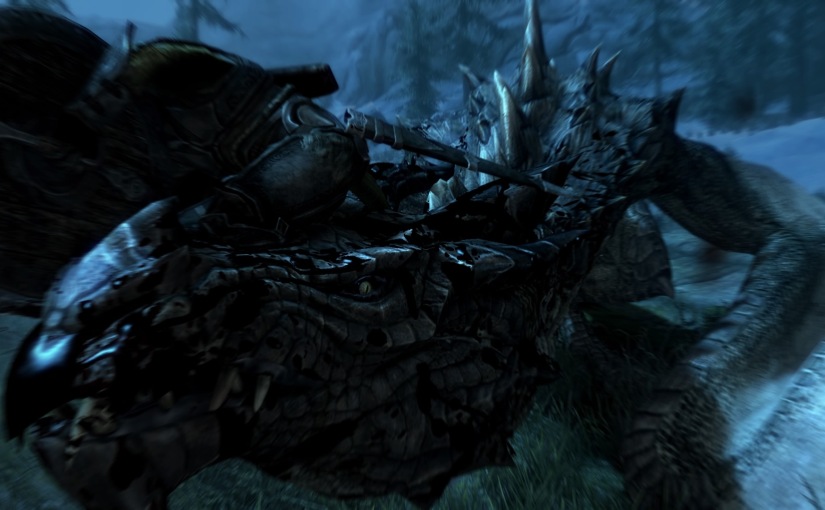 Our hero Philip finds the courage to slay more dragons and encounters some discrimination within city walls of Windhelm.

Don’t be afraid of the dragon!

Philip makes an advance in both the main storyline and bounty quests, finally leveled in skill and confident enough to take on the legend of the dragon. I fulfill two missions.

The first, I follow Delphine to Kynesgrove to defeat a dragon rising from the grave. She gave me a warning that dragons are coming back to life in Skyrim, but at this point everything is just hearsay. I feel as if I have not completely earned her trust. It was time to prove my namesake.

There are firsts for everything and this scene was one Philip will never forget. After a long journey in the wild, I approach my final destination of Kynesgrove. Cloudy and snowy, nature was telling me a stormy battle was ahead of me. I see a dragon hovering over a mound. It seemed like he was having a conversation with something, but I couldn’t catch his words. Suddenly, a skeletal dragon rises, a sight to behold for the Dragonborn.

The rumors are true.

Just how was that possible?! What is going on? I regret not listening to his words earlier, but it was too late to go back. The skeletal dragon gained back his face, his scales, his tail. The dragon really came back to life, but there was no time to question it. I took my steel sword and bludgeoned it repeatedly till it was dead. A ghostly mist rose from the ashes, and the quest was completed.

The experience was invigorating, and I gained the confidence I needed to defeat the dragons of Skyrim. I completed a bounty mission at the Autumnwatch Tower to kill another. It was easy when the dragon touched down, but tracking it was the adventure.

Climbing the tower, I could hear the roaring dragon from above. The top of the tower connected to the mountains, where the beast mightily flew above. The dragon didn’t immediately land on the ground, and Philip needed to climb back down the tower to have the space needed for battle.

Upon struggling to tame the flying dragon, this was a test of my archery skills. Mind you I am playing Skyrim on a PlayStation controller, which is a completely different experience from a keyboard. It’s times like this I wish the controls were more comfortable, but I had to make due. I equipped my Elven bow and let the arrows fly, and the dragon’s health significantly drained. Hit. I was actually hitting the dragon! Months before, it was a struggle to even use the archery function for a moving target. But this target was moving, and Philip was skilled enough to take a grand amount of health down before my final swore impale on the ground.

It’s an exhilarating feeling knowing I’ve gone this far. I am a Dragonborn, a dragon hunter. Where’s the next dragon quest?

What an odd situation to be in, as I stroll through the city walls of the majestic Windhelm. Grand walls surround the area with even taller buildings. I arrived by eve, a cold mist blankets the town and snow gently falls on the passing townspeople.

Everything seems calm, but there’s a different air to this town. Walking through the gates, I’m greeted with piercing stares. Typically I receive a warm to neutral welcome when discovering a new location, also including people wanting me to join a guild of sorts. This was different, and it became apparent as a Nord named Rolff Stone-Fist challenged me to a brawl.

I, an Argonian, was not wanted in this town.

The comments and threats became apparent. My reptilian kind was not wanted in a sea of Nords. Any question I asked was answered with spite. I needed to prove myself in a fist fight and show I was capable. I am the Dragonborn. It was no competition (considering Philip is at level 23), and his tone changed some bit. I was still seen below him for my race, but I earned a sliver of respect. 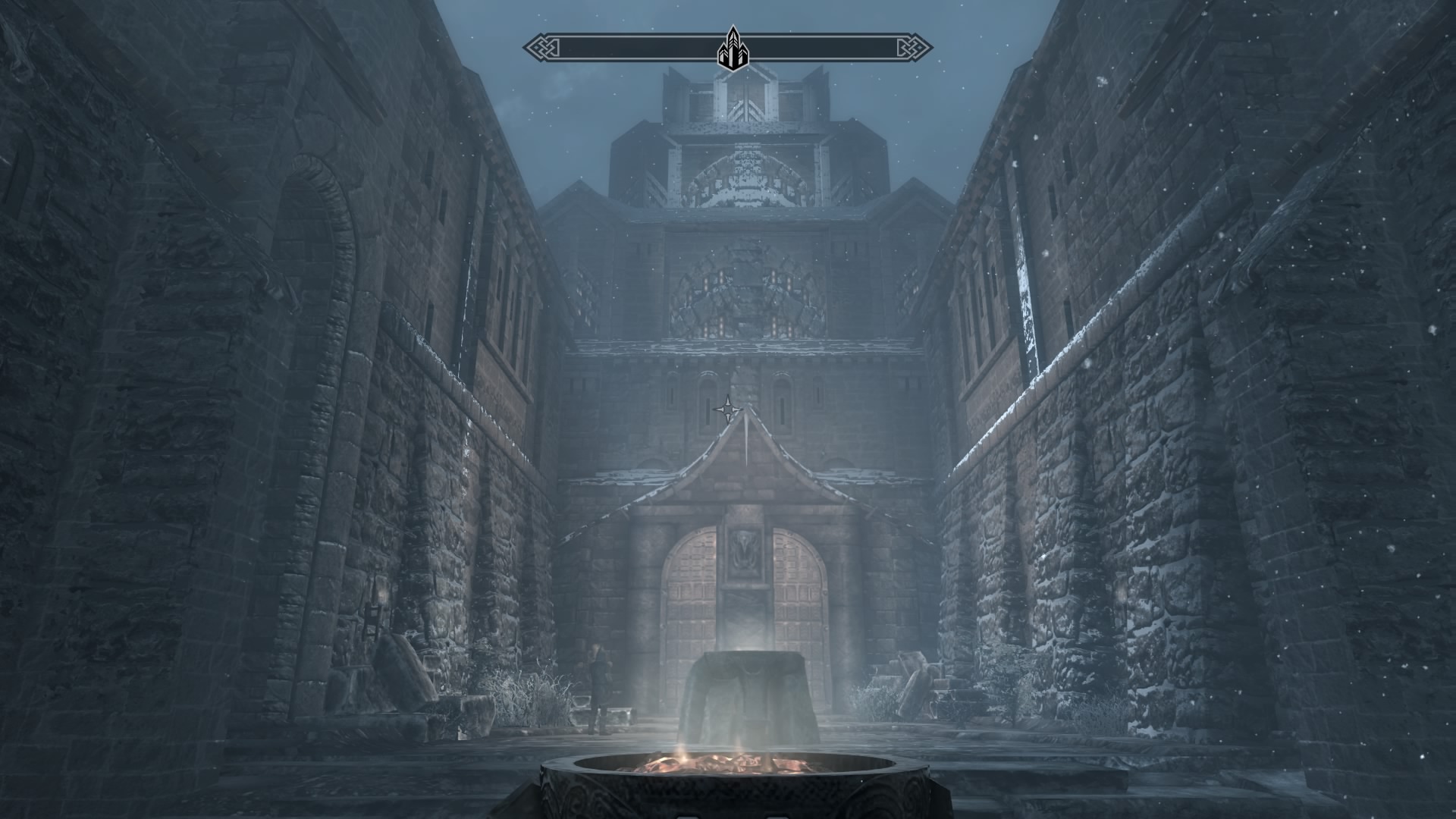 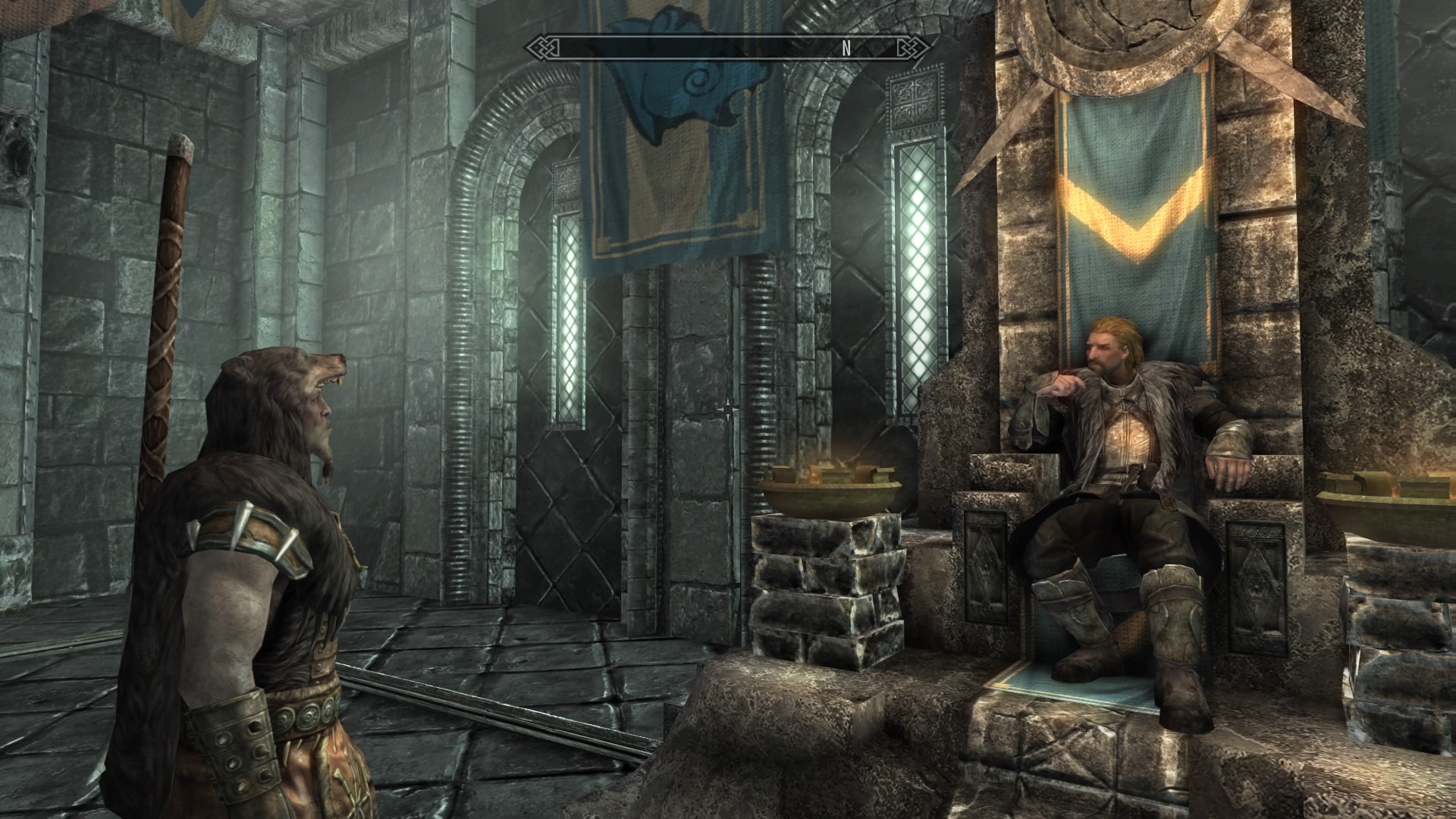 Although I was mostly unwanted, there was one group interested in my skills. I spend some time exploring the town when I discover their Jarl, Ulfric Stormcloak, who I met in my first minutes playing Skyrim. What a chance to cross paths again! I was sent to him by a townsperson named Ralof. I speak to Ulfric and his righthand man, Galmar. Although I am who I am, they see some use with me joining their group called the Stormcloak Rebellion.

Is this the chance to prove that an Argonian can be trusted? I’ve barely touched the surface of Skyrim. I have a lot of things to prove.