We’re counting down to the release of the highly anticipated Yakuza 6: The Song of Life on March 20, and here’s everything to expect so far with the final chapter of the Kazuma Kiryu!

A quick explanation of the Yakuza series

The very first Yakuza (Ryū ga Gotoku in Japanese) game released in 2005 in Japan on PlayStation 2, then worldwide in 2006. Thereafter, Yakuza 2 to Yakuza 5 come out to PlayStation 2 and PlayStation 3. All the Yakuza games take place in Kamurocho, a fictionalized city based on Tokyo’s Kabukicho district. The game is very successful in Japan, even leading to a spinoff game called Yakuza Kenzan, playing during the Edo period.

Sega announced that although this is not the final game of the franchise, Yakuza 6 is the finale of our protagonist and gangster hero, Kazuma Kiryu.

The game follows the adventures of Kiryu as he grows within his Yakuza clan and grows as a person. He forms a relationship with Haruka Sawarama, a little girl who he adopts as a niece of sorts, and has a closer connection to Kiryu revealed after the first game. The series shows the contrast of his violent side versus his caring and emotional side, also prevalent in substories where he helps random people in Kamurocho with their problems. Kiryu can also spend his spare time playing mini-games, and some of them are outright ridiculous. Gameplay is often compared to Grand Theft Auto, but the battle system are more vicious fist brawls than outright killing and running people over. You can always count on the storyline to pull your heartstrings, just as much as you can count on this game to also be a whacky and wild adventure.

Sega began an effort to create a bigger following for the game as well as revamp the game in such a way to thank current fans for their support throughout the years. In 2016, Sega released Yakuza 0 as a prequel for the series. Yakuza 0 goes further in depth on 20-year-old Kiryu, but the game takes it further by adding a full storyline to popular side character, Goro Majima. The prequel intertwines their stories, explaining how relationships, decisions, and events affected how they are today. New and old fans are rewarded even further with Kiwami, the series remastering of the first Yakuza games in HD. Aside from graphics, new cutscenes, storylines, and easter eggs are added to expand the universe and add more details to the narrative.

You can expect Yakuza 6 to continue with the same features, as well as taking it up a notch with these additions.

The Yakuza series has experimented with different cities for the player to explore (notably in Yakuza 0 is Sotenbori, based on Osaka’s Dotonbori), and this game changes it up by taking Kiryu out of his comfort zone.

Yakuza moves to the coast in Onimochi Jingaicho, a fictional town in Hiroshima. A few gameplay footage has revealed the environment during day and night. Many of the buildings are neutral colored with a much more rustic and residential feel, and during the evening there are more street posts and dimmed signs instead of saturated neon lights of the city. The area is much more dynamic, showing hilly areas and flat coastal areas. Kiryu can walk up flights of stairs to visit a temple and the neighborhood, as well as he can walk down to the boat docks and see the view.

A change in setting will help bring out the story, especially because Kiryu will discover many things in the coastal town.

So a guy walks into a bar with a baby… 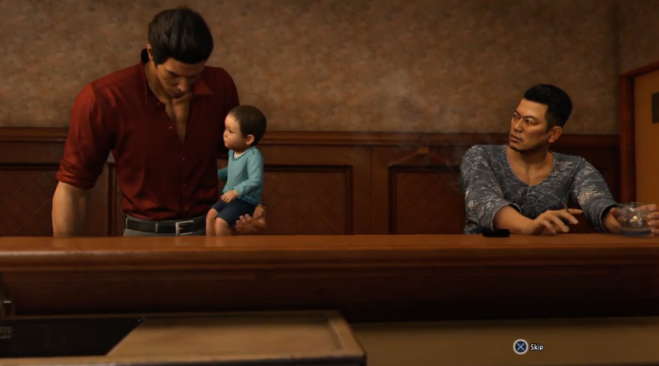 One of the main topics revealed in trailers and previews so far is that there is a baby involved, and Kiryu will be spending a lot of his time holding onto him. Probably at the most inopportune times, because a lot of the footage revealed so far Kiryu is caring for him inside of a bar or out in the streets at night.

Dragon Engine makes this the best looking game of the series

Sega embraces a PS4-made engine called Dragon Engine, adding more depth, lighting, reflections, and detail than ever. Cutscenes are the most crisp we’ve ever seen. The nighttime scenes in Kamurocho look even sexier than ever (is that an appropriate word to describe it?!) 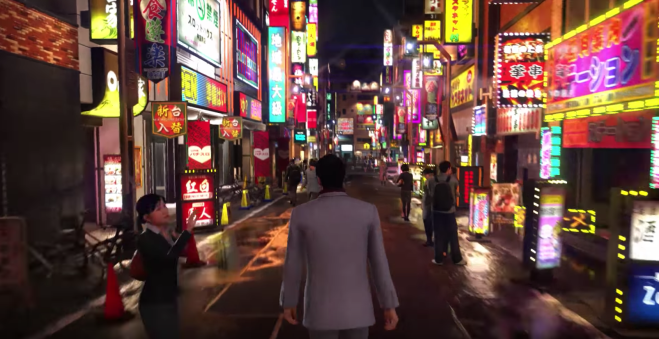 Is it a Yakuza game without everyone’s favorite mini-games?

This game will the usual mini-games from karaoke to mahjong to hostess club, with the addition of other arcade games (Virtua Fighter and Puyo Puyo) and webcam/live chat with women.

One of the most anticipated mini-games: finding stray cats and creating a cat cafe. Yakuza continues to prove itself as one of the most ridiculous franchises, continuing the irony of a rough and tough yakuza member participating in the most random side activities in his spare time.

Did I forget to mention the game is seamless?

To portray a real story and cut waiting time between essential to the narrative, Sega eliminated loading screens for Yakuza 6. The player will experience an uninterrupted game not just within the main storyline scenes, but for substories and mini-games. Walking into a restaurant and ordering food will show no pause, for example. Feel closer to the game as if you’re truly in Kiryu’s perspective.

The biggest question on everybody’s minds for the final: Will Kazuma Kiryu die?

Kiryu has walked the line of life and death for 13 years, and it’s been highly speculated that this is the final battle, symbolically and literally. Others are speculating that he won’t die, but leaving the Yakuza life completely:

Fans are analyzing Director Toshihiro Nagoshi’s words, saying that the ending the “legend of Kazuma Kiryu” does not necessarily mean his death but his impact as a Yakuza. Kiryu is done as a gang member and starting a new life away from Kamurocho, potentially foreshadowed by a lot of the game taking place in Onimochi Jingaicho.

It’s a bittersweet feeling for me, especially because I played my first Yakuza game in 2017 and joined the fandom really late. Now we’re seeing the final chapter of Kiryu’s storyline, and I’m afraid to let that go. Of course, the games will always be there and after this I’ll still need to play Kiwami 2 for 2018. Take it from me. It’s popularity outside of Japan is still rising and with remasters practically being thrown at you, there’s no better time to play.  If you’re the slightest interested, it’s never too late to join the Yakuza bandwagon and play one of the best narrative games of this generation.