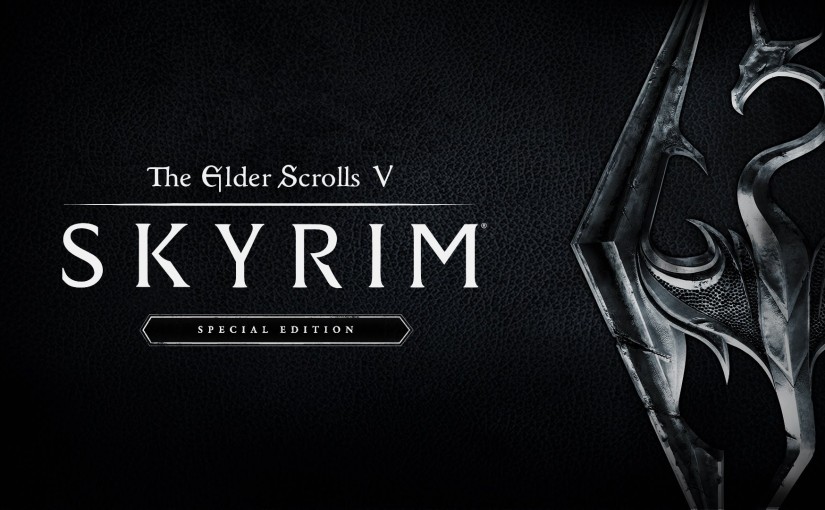 6 years after its release, I am playing Skyrim for the first time and it turns out I’ve been severely missing out. Here, I talk about the misadventures of Philip the Argonian, my first 12 hours into an Elder Scrolls game.

Where do I even begin? 12 is barely a dent compared to the hundreds (even thousands) of hours people have spent on this game. I’m not that into medieval lore. Yes, I admit I used to look from the outside-in and misunderstand the magic this game has to offer. But now I’m a little older and the cards just came into place for a better understanding of why this game is great. Here, I give insight from a noob in a set of blogs called the Skyrim Diaries.

I have Skyrim on PS4, and these graphics blow some current 2017 games out of the water. I remember hearing from many how beautiful this game was when it came out, and it still is. This game does an excellent job with the environment, Picturesque scenes behold you left and right. Nothing looks more gorgeous than the evening starlit sky.

This is my test for first person

Admittedly, I don’t play first person and I’m not used to it. I’ve played majority of this game so far in third, although I know it’s not preferred. I have been slowly training myself to get used to first, and I appreciate this mode for the benefits with perspective and sight. I’m getting used to moving and battling in this mode as well, although sometimes I need to switch if I’m having trouble. I’m hoping by the time I put a significant amount of hours in this game, I can proudly say I played mostly in first person.

Side quests and skills galore

I’ve traversed from Helgen to Riverwood to Whiterun to now Ivarstead, and every NPC you talk to has a quest. Take out this wolf clan, find the Nettlebane, infiltrate this dungeon and kill a ghost, kill the bandits… Of the time I spent in this game, I think only 2/5ths of it went to the main storyline. I’m amazed by how many things you can do, I’m trying to roll around and dip into everything I possibly can. 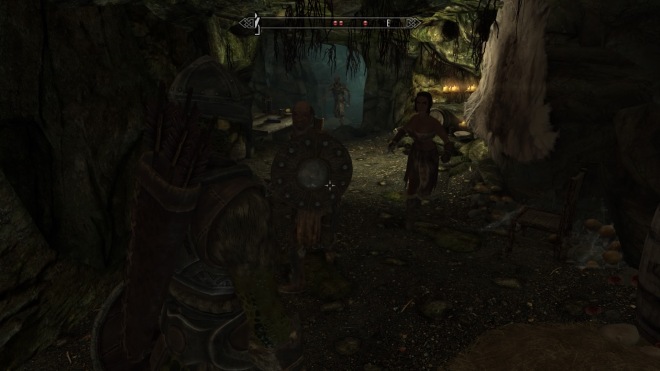 Whenever I do side quests, I’m carefully walking the paths and searching every barrel if I can pick up any ingredients for alchemy. I’ve been obsessed with experimenting potions. A lot of my mixtures have failed, but what’s wonderful is every little thing you do in this game accumulates experience.

Time to find all the mountain flowers!!

Fuck, I killed a sabre cat and that was a pain in the ass

There’s been two tough battles as a low level peon: the witches and the sabre cat. I’m going into the sabre cat battle because I had to redo this three different times due to incompetence and rage. I’m climbing up the mountain, and I had no idea this animal was coming. At first I thought it was a bear I could sneak around, but then this huge ass saber cat started railing on me. I had to use multiple potions, healing spells, loafs of bread, and I was having a really hard time. Blocking worked but my shield wasn’t as up-to-speed to handle it.

My 2nd attempt killing the animal, I was so close to defeating it but was worried about my health. I needed that split second of a potion, spell, anything to recover. I blocked, but the monster came through that iron shield like it was nothing and destroyed me. That was one of the most disappointing losses I had thus far in this game, as I was so close to getting it.

My only real method to defeating the sabre cat was hacking at it so it didn’t even have time to attack me. That was also my method for defeating the witches. I don’t think there was any real method. Block, sword, block, sword. I was very low on health this 3rd time, but thankfully I successfully dodged a few times and could save more potions to replenish.

Finally getting that quick cutscene to Philip stabbing the sabre cat to its demise, looting all its drops… my accomplishment for the night. 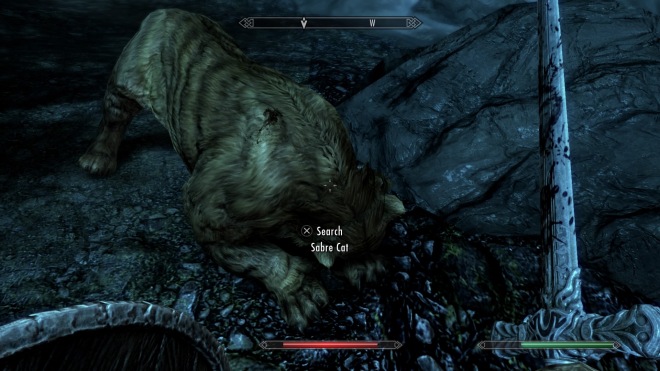 How long do I have to climb this down mountain for the Greybeards???

This is where I’m currently at and saved. I followed the markers to Ivarstead, but it ends up being a halfway point to the top of the mountain where my final destination lies. A level 9 Argonian, trying to learn about my new powers as a Dragonborn, and I have a ways to go.

It’s not about the destination, but the journey with this game. And clearly this is going to be a very long journey…

Any tips you think I might need as I continue playing Skyrim? Leave something in the comments!

2 thoughts on “Skyrim Diaries #1: Stepping into the World of Elder Scrolls”