Things are getting more interesting on Skyrim as I’m encountering a bunch of cultists questioning my Dragonborn, and I spend some time in the snow to find the Shrine of Azura. All in the third edition of the Skyrim Diaries!

A bunch of cultists questioning my authority

That was quite a rude awakening… climbing down the mountain after visiting High Hrothgar, I move towards a lakeside town called Riften to start up one of my miscellaneous missions. Perched on the edge of the water, its reflection glimmers along with the autumn leaves lined up. Walking towards the gate, the keepers wanted a bribe for entrance (but I was able to persuade them otherwise). I take my first steps into Riften, and the bustling trade town has a few honorable Imperials, a thieves guild, and a bar called The Bee and Barb.

Suddenly, a few Argonians walk up to me in frightening skull masks. Their first question? Is it true you are the Dragonborn? At first I thought it was my people congratulating me on the new discovery, but choose any answer and the Argonians reveal themselves as cultists trying to assassinate you. They believe you’re a false Dragonborn! 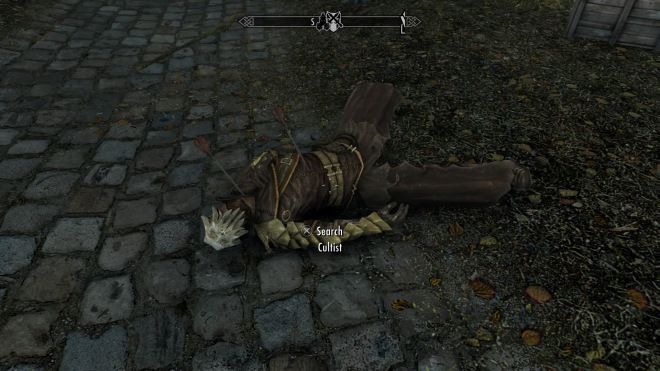 With great power comes great responsibility. I’ve read their note, and that’s where the story stands. Eventually I will make my journey to Solstheim to resolve this issue. One day they will understand my power, and one day they will follow me.

Learnings on the grind

I’m figuring out different methods to major level grinding for my one-handed, heavy armor, blocking, sneaking, and various magic abilities. I’m in Ustengrav to grab the Horn of Jurgen Windcaller. Before entering this dungeon I was at level 15, and leaving I achieved level 18 for myself by grinding with easy Draugrs and Restless Draugrs. I stayed snuck the entire time, allowed Draugrs to attack me and blocked them for minutes straight. In-between I spouted a few healing spells and shock spells. My restoration and desttruction abilities improved greatly, and I added a few illusion spells here-and-there to get through. I spent maybe 2 hours more than I really needed to, but I am more powerful than ever. (Maybe I can fight a dragon at this point?!) Let’s just say I’m going to take full advantage of this.

This may have been the toughest track with my quests so far, moving north to Winterhold College and the Shrine of Azure. The mountains are vicious, with a few dragons and ice wraiths attacking me. It was quite difficult to kill these wraiths, by the way, and were really pesky creatures. I’m getting better footing with attacking and aim, but these were annoying. Thankfully, these beasts released a lot of great ingredients for loot.

The way up is always the hardest with no real path guiding me. The path I chose involved a dragon I decided to sneak by. I genuinely just wanted to find the shrine and continue on with my missions, but I will take care of that dragon another time. The weather grows wearier and the winds blow. I just had to continue jumping and weaving around rocks. I’m lacking the patience to continue and wonder if I should fast travel back to civilization and try another time, but I tread on so I can complete this quest.

And I finally get to the foot of the Shrine of Azura, a tall figure of a woman raising her hands above the mountains. This place holds an importance and I don’t know what. In case there’s bandits inhabited on this land, I sneak up the stairs. The base is almost in ruins with wear and tear. At the final step is a tent for one, and before me is Aranea Ienith. Her costume looks ominous but she is simply a mage. I talk to her, and she compliments me for my journey and arrival. Not everyone can make it to this shrine.

After a conversation with her, she suggests that I test my magic at the Winterhold College. Climbing down the otherside of this mountain will lead to the school and town of magic. As of right now, my magic abilities are underdeveloped. This meeting is done, but Skyrim has other plans for me. 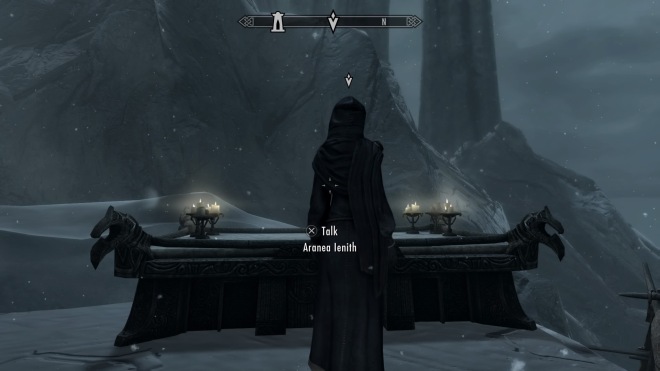