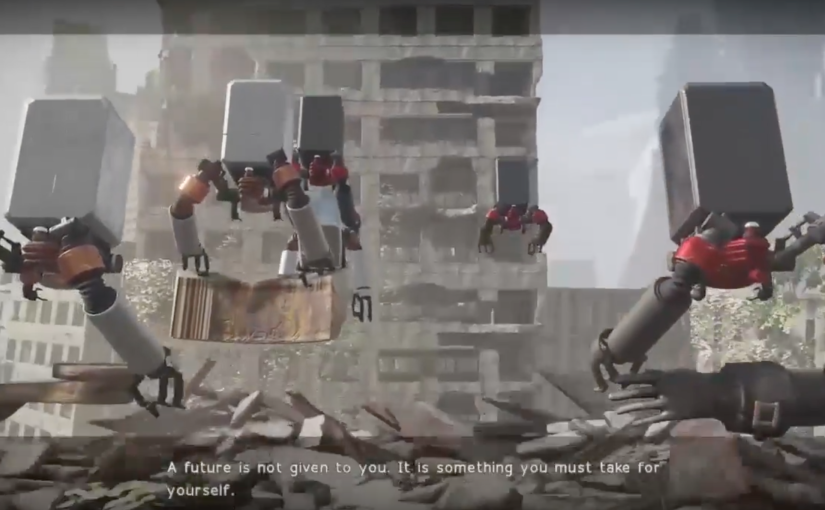 The biggest plot twist for me… is that you could have easily missed everything.

(This article contains spoilers of the main storyline)

I’m fresh out of Ending E of NieR: Automata, the first game I completed for 2018. The game incited many emotions and reactions on my part, many of them verbally recorded for all of you to see. Those can be seen at the bottom of the article.

The game also brought many headaches, potential plotholes, and rolling around figuring out what the hell happened for days. I have two thoughts about the finale that I wanted to put into words.

In an effort to save humanity, the player can miss a lot of the game’s aspects that make it human

Like any role-playing game it’s expected to see a lot of side quests available to play, but players need to be careful with NieR: Automata is that quite a few characters you see in the main storyline won’t make sense if you dedicate time to the extras.

What struck me is when Popola and Devola’s memories are unveiled in their final scene, and the story is completely optional. In their valiant efforts to protect 9S, the player has an option to read their consciousness before their deaths. The memories explain a lot about their class of androids and purpose to be guilted into helping out in the war. Popola and Devola’s background is influenced a little by the original NieR game, being put to blame for the failure of Project Gestalt. (Speaking of which, Gestalt is another side quest you can easily miss). All of these helped me understand the characters of the resistance camp, but it’s not mandatory.

Other instances include Emil (the machine head that rolls around upon entering the Forest Zone) and Pascal (you don’t have help him discover the Old World). Aside from learning more about the characters, side quests connect the previous game with Automata. Although not formally necessary, these stories unveil more truths about the game but make the emotional impact bigger when the finale comes along. The game is already confusing, but it became less confusing for me after playing.

Hack the mainframe! Break the system!

The biggest reveal in this game occurs in Ending C, and is further elaborated upon in the other endings. The tower mission leads 9S and A2 on separate paths to discover their own truths, leading to an explosive finale  of 9S and A2 fighting to death’s end. The details still confuse me, but I will explain it in my own personal interpretation and how it resonated with me:

Humanity has been dead for a long time, and Project YoRHa is in a constant loop of death and rebirth.

Are you confused yet? Yeah, it took me days to put everything into words!

The game shares a combination of elements from Tom Cruise’s Edge of Tomorrow and Black Mirror‘s episode “Hang the DJ”, where the endless loop is capable of being broken because of humanity. Emotions. Drive. Relationships. Humans cease to live, but androids and machines are basically the new humans fully capable of furthering their intelligence and minds. Even androids or some sort of god power wanted to keep its technology in control.

The question that came to mind after assessing all of this: if androids are so smart, couldn’t they just use it to recreate humans and bring them back to life? Why was the solution so complicated? (Alyssa, if the solution was simple, we wouldn’t have this game!! I know, I know…)

But let’s spin it this way. Although protecting human DNA is important to YoRHa, what if its ultimate goal is to find the androids that outsmart the system? Sometimes the challenge isn’t finding the object who obeys, but the one who betrays. The ending is bittersweet, but the more I reflect on it the more positively I feel about it. 2B and 9S are being recreated, Pascal is alive and no longer has memories, but there’s a new future to create.

Check out my recap and reaction of Ending C, D, and E immediately after it happened!